Let me start with a poser. You have the chance to allocate your income across two assets A and B, which currently trade at the same price. The eventual payoff from holding these assets depends on one of two states. You do not know which will occur but are given the probabilities of each state at 0.5. Which asset do you hold?

Your choice on relative assets holdings will, of course, depend on the payoff in the various states. In the example below, the expected payoff from Asset A is 5 (10*0.5+0*0.5), as is the payoff from Asset B (2*0.5+8*0.5). So should you be indifferent between holding asset A or B? Not necessarily. Let imagine you decide to hold A, then you will receive either 10 or 0, when the state is revealed. Similarly if you decide only to hold B, then you receive 2 or 8, when the state is revealed. But if you hold 50% in A and 50% in B, then you will receive 6 or 4 when the state is revealed, which may be preferable to the outcome from holding only A or B. Note that your expected return across the states is the same and is independent of your allocation in this case but the variability of your payoff across the states can be reduced by choosing a combination of assets in inverse proportion to their variability. So if we choose 3/8 in Asset A and 5/8 in Asset B, we will have an income of 5 whatever the state turns out to be and this may be preferable to the alternatives. The observation that an investor is likely to have mean and variance in his or her utility function won Harry Markowitz a Nobel prize in 1990. And there are a number of areas to which we may be able to apply these insights. Let us, for example, use this framework to think about the recent monetary policy problems facing the UK. It is becoming fashionable to argue that the Bank of England’s Monetary Policy Committee (MPC) should have responded in a forward-looking manner to offset the strong possibility of recession and so cut policy rates much earlier and decisively this year. Using our previous analysis would such a policy have been especially wise?

Imagine that Asset A is inflation and Asset B is output and payoffs are negative rather than positive. So the policy maker’s problem is to minimise losses by choosing an appropriate path for Bank Rate. So under X1 there is an inflation problem and something of a downturn and under X2 there is no inflation problem but a severe downturn. Should the MPC have kept interest rates mostly on hold, because of offsetting risks, until it was clear which state would obtain or taken a gamble and judged that X1 was simply not going to happen? In other words should the MPC have behaved like a speculator with his or her own strong prior beliefs and plumped for one outcome or the other? Or more like a portfolio manager and adopted a policy that delivers some stability in either possible state?

Some MPC members and one in particular seem to have adopted the speculator’s stance to go overweight on one asset rather than manage the possible portfolio of risks. Some might consider this to be a dangerous way to set policy because even though you may get lucky, and the inflation threat may dissipate, you may also get very unlucky and exacerbate the inflation threat. The MPC as a whole plumped for the portfolio approach. In the August 2008 Inflation Report (http://www.bankofengland.co.uk/publications/inflationreport/irspnote130808.pdf), the collective judgement of the MPC was that there were upside risks to inflation and downside risks to output and so like our portfolio manager they played it safe and did not move interest rates radically until it had become clear on which side the risks emerged. 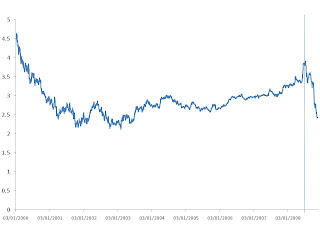 The financial markets were perhaps more circumspect (!) than some MPC members. The chart below shows the five year inflation forwards calculated from the difference between the yield on nominal and index-linked (real) government bonds, which are linked to the retail price index (RPI). It is not a simple matter to interpret the inflation forwards as necessarily measuring inflation expectations as they may encompass either or both of inflation and liquidity premia. But if we hold those concerns to one side temporarily (and perhaps heroically), we can see a drift up in the expected inflation rate five years ahead from mid-2002, possibly reflecting concerns about the house price boom and second round effects from oil and commodity price rises. And throughout this year these inflation expectations also continued to drift upwards and it seems that only after end-August did these start to fall, and then somewhat precipitously. (Some of this fall seems relate to a flight to liquid assets as the financial crisis once again took a turn for the worse.) And that was the time interest rates should have started to fall as we found out that we were likely to have arrived in State X2. Since that August Report, Bank Rate has come down in three large steps from 5% to 2%, so what’s the problem?
Posted by Jagjit S. Chadha at Tuesday, December 16, 2008 1 comment: