Much ink has recently been split on the causes and consequences of the sharp decline in UK exchange rate. The bare facts look to be a concern, since mid-September 2008 sterling has fallen by 14% against the Euro and some 25% against the US dollar. In combination with the confirmation of a deep recession, it seems that the world is shunning the UK. The speed and extent of the decline is remarkable and is not dissimilar to that which occurred in the days and weeks following ERM exit in September 1992. It is even argued that if Sterling is to lose its role as an international store of value then far better to consider joining a large currency zone where the external unit of value cannot be so easily buffeted around by gales blowing though the world of international finance.

So just how much of a problem is the depreciation of Sterling and does the scale of the decline provide a potential cure or kill for the UK economy? The Chart (below) shows a weighted average of the UK exchange rate versus the US$ and the Euro on a daily basis since 1985, with down signalling a depreciation in Sterling. The red-line shows the ratio of share prices in banks relative to those of the FT All-Share Index and is a measure of the news on banking profits relative to the whole economy. We can see that ERM exit was broadly a good thing for bank shares, most probably signalling that UK policy rates were more likely in future to reflect domestic growth prospects – implying that the bank profitability would benefit from such a re-direction. Furthermore, in the mid-1990s, once growth had been re-established Sterling did recover its previous level. On the other hand, we can see that the more recent fall in the exchange rate after the start of the Credit Crunch in 2007 (vertical line), seems to have been driven (at least in part) by the relative downgrading of bank profitability compared to the rest of the economy. In other words rather than being an exogenous cause of bank profitability and recovery, the widespread perception that this crisis will continue to constrain financial intermediation for some time to come may have led to a fundamental re-assessment of the Sterling’s fair value. 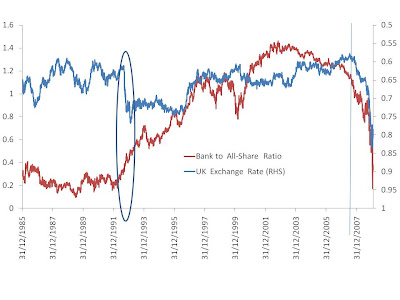 So where is the gain from the fall in the currency? Those involved in international trade will not be pleased, importers of goods and services will face higher bills and yet because of weak UK demand may find that it is not possible to pass on these higher costs and their profits will be directly reduced. Exporters may superficially benefit but much of UK exports are simply added value to imported raw materials or component manufacture and so the direct gain will be somewhat militated. It also seems likely that international corporations may dislike to notion of being sited in an economy where the exchange rate fluctuates widely as this will tend to disrupt profit forecasts and the lead to volatile remittances priced in foreign currencies.

But even if the exchange rate channel offers a rather weak form of direct support, it might be that every little bit helps. And so to the extent that the fall in sterling simply reflects an anticipated reduction in interest rates in the UK relative to those overseas, then exchange rate adjustment may help the economy adjust to its new equilibrium following a constellation of shocks. For the UK economy a list of these shocks might include: (i) a persistent downward shock to the value of financial intermediation; (ii) a downward shock to asset prices and hence net wealth; (iii) a realisation that the household balance sheet was becoming too heavily indebted and (iv) a global reduction in overall demand for UK goods and services.

As well as the possible impetus to net exports there are two further ways that the exchange rate depreciation may help the UK economy. First in the midst of mounting deflation pressures, a large exchange rate depreciation offers a one-off increase in the UK price level that will hold those pressures in abeyance for some time. The depreciation will increase the price of traded goods and lead to a temporary inflation as the increased costs of imported goods feeds though the economic pipeline as typically it is still the case that there is a large pass through from a nominal exchange rate change into the domestic price level. By keeping inflation temporarily higher than it would otherwise be, the economy may avoid some of the problems brought about by too rapid a disinflation. Secondly, the reduction in the foreign currency price of UK assets means that they may now offer a good prospective return in foreign currency terms and lead to some support for both the domestic housing market and equities from foreign capital, which may be looking for a place to park itself.

The danger really is that the depreciation in Sterling hinders in some way the government’s ongoing ability to deal with the financial crisis. By which I mean that we can characterise the policy response to the crisis as a transfer of risk from the private to the public sector, as we are using public debt to hoover up private debt contracts. If the decline in the exchange rate becomes widely thought of as a reflecting risk in the UK, rather than an adjustment associated with economic fundamentals, then the upper bound on the government’s ability to sell its debt will bite somewhat earlier than would otherwise be the case. And that in the end is the real risk from a Sterling sell-off – that it somehow signals looming fiscal insolvency.
Posted by Jagjit S. Chadha at Wednesday, February 04, 2009 1 comment: