Deflation - a real problem and a possible cure

I ended my previous post with the question: so what’s the problem? And I suppose it is Deflation. A persistent deflation poses particular problems for monetary policymakers because with nominal policy rates facing a lower bound of zero, central banks can, in principle, lose control of real rates that will continue to rise if inflation expectations follow inflation down. Deflation is, of course, not a new phenomenon and prior to WWII year on year deflation was over the long run as likely as inflation but as long as inflation expectations remained in line with notions of long run price stability real rates would perhaps not destabilise the economy. The real worry for policymakers as we head into a deep recession is that inflation expectations fall markedly in line with deflation. Wide-ranging monetary and fiscal policy responses will then be designed to try and prevent a significant and persistent fall in inflation expectations.

Over the past decade or so we had become used to the following story about monetary policy. Short-term policy rates are nudged, with some reluctance, in one direction or another in order to limit the deviation of short-term inflation forecasts from an explicit (or implicit target). These short-term inflation forecasts are projections of the output gap and so the basic story says that by stabilising inflation, output is kept as close to potential as possible at the same time. The parable finishes by soothing us with the observation that providing the economic shocks are not too large and monetary policy continues to have traction on the economy via its influence on financial prices, then the economy should tend towards stable outcomes.

This nice, linear story is illustrated in Chart 1 (see http://econpapers.repec.org/paper/ukcukcedp/0815.htm for more details). Here we show a Fisher equation, which relates short-term nominal rates equiproportionally to inflation (or inflation expectations). The intercept corresponds to the economy’s natural real rate, which is essentially exogenous to monetary policy and is closely related to the expected growth of per capita consumption. The inflation target determines the long-run expected level of nominal rates, which are equal to the natural real rate and the inflation target. The central bank’s policy reaction function is to respond actively to any expected deviations in inflation from target and so is drawn steeper than the Fisher equation line so as to suggest policy induced real rates that are lower or higher than the natural rate, when inflation is correspondingly lower or higher than target, which acts to boost or bear down on demand as required. 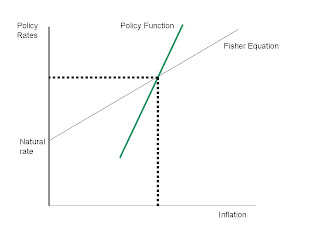 But things can change quite radically once we move out of this comfortable little space. Specifically, if inflation starts to decelerate quickly, the central bank can find itself bumping near to its zero bound on nominal rates and might, in principle, lose control of its ability to set real interest rates. At this point short-term debt instruments and money yield near-identical nominal returns, and given that bonds bear a default risk, there will be a strong preference to hold liquidity in the form of cash. This means that even though the central bank will continue to supply private agents with escalating levels of narrow money to meet this increased demand, it will not be spent and demand will not emerge to chomp up the large output gap.

Chart 2 shows the limits to the standard mode of interest rate control. Once nominal rates hit zero at Point A, if inflation continues to fall real rates will then start to rise. And so there is a possibility that the output gap will get even higher as rising real rates bear down even further on demand, leading to a loop of lower inflation, higher real rates, lower demand and even lower inflation. The classic answer to the deflation trap is that at some point money demand will be sated and the decrease in the price level will mean that money holders will feel wealthier and start to spend. But in a world of debt that may not be sufficient because if those money holders are also indebted, the fall in the price level will increase the real value of their debt and so ultimately the existence of a deflationary trap will depend on whether the increasing indebtedness of debtors outweighs the increasing wealth of money holders. 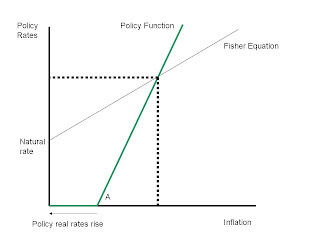 So will a deflation lead to a complete economic collapse? Not necessarily. Chart 3 shows two annual inflation distributions in the UK from 1800 to 1947 and again from 1948-2007. The first distribution seems reasonably symmetric around zero and suggests that deflationary years approximately matched inflationary years in the nineteenth century and the first half of the twentieth century. Subsequently, we have hardly any evidence of deflation to draw upon, with inflation mostly moderately positive (with occasional lapses in good behaviour). It is not at all clear that we can make a simple comparison between a financially complex economy and one that was still in the midst of industrialisation. But one clear distinction can be made as there seems to have been long-run price stability in Britain in the earlier period: which implied offsetting years of positive and negative inflation, but these did not necessarily bring about sustained economic crises. Why?

One reason might be that the maintenance of long-run price stability means that a temporary deflation, which lowers the price level, was also accompanied by expectations of an inflation, which would return the price level back to its long-run average. The advantage of a positive inflation expectation during a deflation is clear because even though current inflation falls, expected inflation rises and this means that the expected real return on stable nominal rates falls. And so the likelihood of a deflation taking hold in a persistent manner may be significantly mitigated. 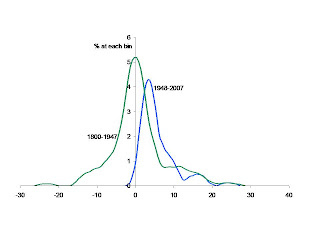 Unfortunately, in the current deflation scare, in the UK inflation expectations have moved very much in line with current inflation, which is rather unfortunate and suggests that credibility, the belief in the inflation target, may be less than complete. The rise in CPI inflation from 2004 to 2008 was accompanied by an increase in both breakeven inflation and NOP inflation expectations and as CPI inflation has started to decelerate in the second half of this year we have almost immediately noticed a decline in inflation expectations. The nominal anchor seems to be being dragged around by contemporaneous developments and hence the monetary constitution may ultimately be in need of some reform.

An important part of the answer in dealing with a deflation is to conduct monetary and fiscal policy in such a manner that inflation expectations do not fall along with prices: that, in fact, as far as possible they remain at or near the inflation target. Convince agents that inflation will be higher in the future than it is now, so enabling real rates to fall as nominal rates fall to zero. And so if the risk of deflation is real, and in the most recent Inflation Report the Bank of England placed the probability at around 20%, we can expect a highly accommodative monetary and fiscal policy stance to be maintained.
Posted by Jagjit S. Chadha at Thursday, January 08, 2009