How much growth divergence will spit the Eurozone?

The main economic criterion for a monetary union across a set of economies is that they should be sufficiently synchronised so that the a single interest rate does a reasonably job in stabilising each economy in response to shocks. For this observation, Robert Mundell was awarded a Nobel prize in 1999. But even in any one long established nation state, this criterion often seems be a major challenge. In the UK, for instance as the story goes, the industrial north in the 1980s suffered a depression while south the benefited from a boom – on average there may have been some form of balance but perhaps not one that was ideal. This kind of schism also seems to have inflicted itself on the Eurozone.

A recession is a particular test of a monetary union, as it seems likely that the patience to accept slightly awry monetary policy from the perspective of any individual state may be more severely tested in a recession rather than boom. In this case, the credit shock that triggered the economic bust may have impacted in a different manner on the individual members of the monetary union and it seems likely that different countries may pull out of the recession more quickly than others, which implies a persistent divergence in growth rates. So has recession been associated with a wider distribution of growth rates in the Eurozone wider? Has it been associated with increased national differences in economic growth? 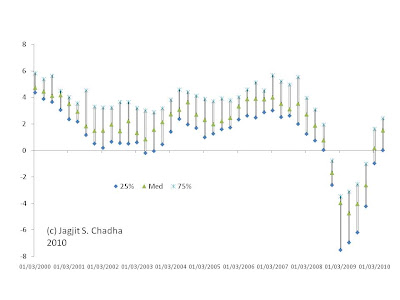 But to me the increase is dispersion does not seem that great, I leave as an exercise the calculation of whether the differences in dispersion of growth rates are significant. Part of the reason here is that countries have been able to resort to an increase in public indebtedness to deal with their domestic output gaps. This response may well be a once-and-for all increase so could be replicated in the event of another downturn. But I do not know, and neither does anyone else know what the trigger point would be for a collapse in monetary union. 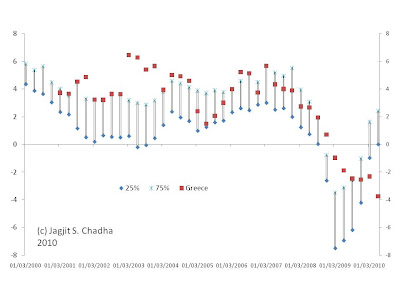 What is more important than the unconditional dispersion in growth rates in any one quarter across the countries, is the persistence of the deviation in any individual country from the median and what we can observe, even for Greece, is that sometimes it has been a winner and sometimes a loser so if the state can be patient enough EMU may even work for them, financial markets willing. (The chart below simply plots the inter-quartile range of growth rates and as red blobs year on year Greek economic growth.) We will return to that question next time.
Posted by Jagjit S. Chadha at Saturday, October 02, 2010