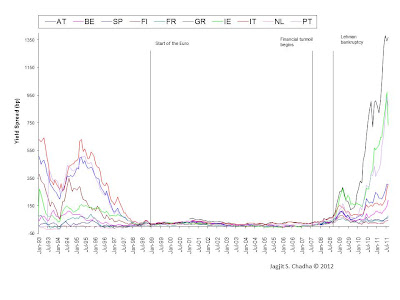 The crisis in the Eurozone has dominated financial market sentiment over the summer. And so I shall restart my blog by asking the following question. What is an asymmetric shock? The question, of course, stems from the basic condition for a sustainable monetary union: that the kind of shocks that lead to changes monetary policy should be highly correlated across any such union. If they are not highly correlated this will place the sustainability of the union under pressure as member countries face less then ideal policy rates. The more a country is different from the average the more it larger the boom and bust we will will observe over succesive business cycles.

The chart above shows the soveriegn debt bond spread over the Bund (10 year German benchmarks) from 1993 onwards for the nations that went on to join the Eurozone. The changes in spreads represent changes in market prices for default risk, liquidity premia and domestic preferences for holding debt. What we note is that there was dispersion in bond spreads prior to the adoption of the Euro and again after the start of the financial crisis. The bit in the middle corresponds to both the heyday of the Euro but also the period of excessive liquidity creation by the financial system.

It would seem at first glance that going back my original question it is the first and third periods that suggest asymmetric shocks. And that it is the middle period corresponds to some elimination of differences. The compression of spreads in the middle period tells that financial markets were treating different sovereign debt instruments denominated in Euro as very close substitutes during the Euro's heyday.  In effect, the markets treated the price of sovereign debt of countries that had different fiscal paths and growth prospects almost identically.

This equal treatment of unequals seems to me to have imparted the ultimate asymmetric shock.  Rather than rationing debt with higher prices, the heyday of the Eurozone - possibly as the result of  some form of implicit centralised guarantee - encouraged financial markets to treat the various nations' debt as identically priced and so cheap to issue by any government.  In fact, many treated the convergence of spreads as evidence of Eurozone credibility when in fact it was storing up future problems.  Some of these nations responded, in some degree, by issuing too much debt and not correcting dangerous fiscal paths.  This meant that when there was a negative demand shock - a recession - some fiscal paths became unsustainable and financial market fears of default triggered contagion.  Asymmetric shocks are in the eye of the beholder.
Posted by Jagjit S. Chadha at Saturday, October 15, 2011

Thanks a lot for sharing this nice and informative post, This posts shows your efforts that how do you cover any topic research. I really like your blog because your blog has updated posts on different current issues. I would request you to keep sharing your thoughts.

You've spoken volumes with this information. Your information has helped me greatly and I am going to pass it around to my colleagues. Thanks!

Your web page is undoubtedly full of remarkable data and information as well as is actually incredibly enjoyable to learn through.Properly performed:)