“Countries Don’t Go Out of Business...” 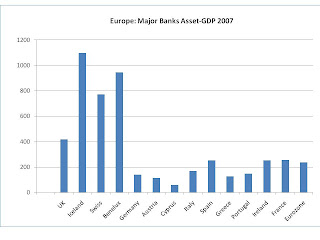 I was this morning reminded of the Chairman of Citicorp’s 1982 famous injunction that a country cannot go bust. What Walter Wriston said at the time of Mexico’s default on its debt to commercial banks was: "Countries don't go out of business....The infrastructure doesn't go away, the productivity of the people doesn't go away, the natural resources don’t go away. And so their assets always exceed their liabilities, which is the technical reason for bankruptcy. And that's very different from a company." But when it was reported today that the country of Iceland may indeed go bankrupt I wondered, not for the first time, where the bottom of this financial crisis may lay. There is a nice irony here in that this time it is banks that are threatened with bankruptcy and they require the help of the nation-states to bail themselves out. To some extent, the early 80’s debt crisis was the other way around.

Developments across European banks, starting with Ireland last week, really are quite disturbing. The unilateral guaranteeing of all deposits and Tier 2 debt is basically akin to the guarantee given by the UK government for Northern Rock last year after its bank run. But as we know this was insufficient to prevent its eventual nationalisation - as no buyer could be found. The guarantee stopped the run on the Rock as far as retail depositors were concerned but did not allow the bank to continue with its wholesale funding model. These recent decisions seem to have been made at the national level with no real consultation with the EC (and in this case the ECB) which as a side-issue will raise a pretty big question mark over co-ordination within the EU and the Eurozone.

But these or any guarantees do not address the fundamental problems of banks that have been far too reliant on wholesale funding and whose asset quality has deteriorated markedly. That problem has been replicated again and again in the UK and elsewhere in Europe. In the case of Ireland and Iceland it is also magnified as it is not one or two banks among many but the whole banking system which seems to have adopted the same model. A blanket guarantee does not help the quality of assets and hence funding liquidity - all it does is re-assure depositors (retail rather wholesale) that their money is as safe as the finances of the Irish state or Icelandic state.

So how much can individual European states help their banks? I plot here the ratio of the sum of major bank assets to GDP for the many of the main European nations (Source: http://www.ft.com/). The ratio tells us neither about the riskiness of each Euro of assets on the bank’s balance sheet nor about the capability of the state to capture its tax base, GDP, per se but does perhaps allow us to put the scale of the problems into some national context. And immediately we can see the scale of the Icelandic problem with bank assets at nearly 11 times GDP, where even a 10% default (if it was backed by the state) would increase public debt to GDP by nearly 110%. Under these circumstances the blanket guarantee would simply not be credible, as an increase of debt-GDP permanently of this size will require a permanent increase in the primary fiscal surplus by some 2-3%!

We also learn that Irish bank assets to GDP are around 250%, which is only around the Eurozone average (obviously not the UK, Iceland or Switzerland) and tells us that in asset terms the Irish banking system is perhaps no larger (or vulnerable) than that of the EZ average. But the extent of the fragility, which despite not having an excessive level of asset creation by international standards, was such that a government guarantee was required. And the need for this commitment device tells us something important about perceptions about the quality of bank assets and the likelihood of continuing funding.

The extent of heterogeneity of individual countries bank asset size is interesting and of particular note is the relative strength of the German state with respect to German banks with major bank assets at only around 140% of GDP. And that even though Italy looks superficially well off the raw number of 170% does not probably deal with the relatively poor credibility of the Italian fiscal authorities, where the provision of a guarantee may be proportionately more difficult. (That said the lending there may not have been quite so risky.) So even if the Irish and others have dealt with their banking stress with a government guarantee - if a scheme of this sort was to be extended to the whole of the Eurozone it is likely to need the guarantee of the German state.

This situation is not unlike trying to devalue a currency within a fixed exchange rate zone. The analogy is that other countries will not be happy with the unilateral increase in relative competitiveness. And there will be some pressure for a further round of devaluations (guarantees), which we have now seen. Most obviously those countries who are most vulnerable and whose assets are closest substitutes will be under most pressure to give a similar guarantee. And again that is what we are now seeing.

Given the juxtaposition of dwindling deposits and deteriorating assets, I would expect governments to will want banks to increase their Tier 1 capital, if at all possible, and that may mean some deals to be struck with Sovereign Wealth Funds and also perhaps the need for governments to take a direct capital stake in banks. Bank mergers will also be a regular event as the market compresses. But given that the root cause is poor quality assets, this may only be the first step on the road to a proliferation in TARPing or some form of insurance support for assets as well as liabilities in the Eurozone and elsewhere. The onus of the government or the public sector as a solution to the immediate crisis will mean that nation-states look likely to become inextricably linked to banks once again but this time as creditors.

On the other hand, we may analyse the responses to the crisis in the light of these informations provided by you.

Later on, ongoing situation in the markets depicted that the crisis did not cease, on the contrary, it deepened. Then the second level of intervention in the turmoil was released. This time, the FED began to fund the market in an aim to improve liquidity. As it can bee seen from the latest financial developments, providing liquidity could not offset the deterioration in the off-balance items of the system. Inherently, a few questions arise among these circumstances; if it is only liquidity crisis, why money injection does not work?

One possible answer is there is such a big pool that the sum of money provided to markets is so small comparing to the size of this pool or assets. The answer directly addresses to your findings. Assets of the system are such a big that the monetary size of interventions remains insignificant.

The other possible answer addresses the latest $700 billion bailout plan. The policymakers of the US – FED and Treausry- have finally realized that the monetary policy is not going to stop the crisis. The FED used the most effective tools to recover markets but the tools did not work. The system can not convert toxic assets into liquid assets. Before the crisis, these securities were traded among the system as means of payment. But after the meltdown in the housing sector, these securities have lost their value. Thus, the deterioration in the value makes these assests illiquid since nobody wants to buy them.

On the other hand, most depository banks are not heavily affected by the crisis. These banks should have some liquid assets. Some of these banks have already takeover some mortage lender institutions but generally, the institutions who have money prefer the strategy `wait and see`. Consequently, the`wait and see` strategy makes the markets illiquid and creates a crisis of confidence. In the case of this crisis the effect of lack of confidence outweighs the effect of lack of liquidity though money pumping does not work efficiently.

Ultimately, the fiscal intervention is inevitable to exceed the crisis of confidence. If the treasury cleans these assets, the confidence can return to the market sentiment.

The third round of the crisis begins. All the toxic assets of the system will be takeover by the treasury. I wonder the results.

It is sobering to read about Iceland's troubles, here is the Prime Ministers address to his people ( http://eng.forsaetisraduneyti.is/news-and-articles/nr/3035 ). What upset me greatly to read was that Icelands banks had very little involvement with American sub-prime mortgages. It is actually a problem, as you quite rightly point out Jagjit, that Icelands GNP is considerably less than the liabilties of their banks. It is more of a problem of the globalisation and access to foreign money markets. Maybe there needs to be tougher regulation on banks like these for capitalisation?

" I will present immediately a bill to parliament which will allow the exchequer to address the current situation on the financial markets. I have spoken to the opposition parties and received assurance that the bill will be passed today. I would like to thank them for their cooperation.

By making these changes in legislation we will adapt the banking system to Icelandic circumstances and rebuild the trust of foreign operators in Icelandic banking and financial operations. If the bill is passed today it can be assumed that the measures will come immediately into force." (from the Prime Ministers address).

We can only hope that the fear and panic about the banking system in Iceland doesn't result in chaos.

"Their currency, the krona, has dropped 45% against the euro and according to their prime minister; Geir Haarde, the country may be on the verge of a "national bankruptcy." "

You can really appreciate the gravity of the sums of money being pumped into UK banks, and for good reasons as you show!

We should make a distinction to answer to your question. The crisis affected mostly mortgage backed security issuers such as Northern Rock and HBOS. The financial institutions-mostly deposit banks- which are not issue mbs are not heavily affected by the crisis.
Money injections and comprehensive deposit guarantees are not working as we are watching the situation. These policies are not providing confidence to market participants.
If somebody wants to do something, they should find a way to deal with the illiquid mortgage backed securities.
The system is trying to increase its liabilities but what about buyers? Who will buy these shares when the downward trend of the market continues? In my opinion, this solution does not properly address the main problem.