One of the root causes of the financial crisis has been the unnatural sight of capital flowing uphill, that is from poor to rich countries. In a famous calculation, Robert Lucas (1990, AER) showed that if a rich and poor country have equivalent production technologies and differ only in income per head, then because the amount of capital employed in the poorer country will be less than in the richer country, the marginal efficiency of capital must be higher in the poorer country and so attract capital. For example, latest EIU data suggests that Chinese PPP per capita income is around $5,000 and the US is $45,000 which implies (calculation available on request) that the rate of return on capital in the US should be around 3-4% of that in China and should mean that China runs a current account deficit financed by a US surplus. The reality has, of course, been the obverse with US recycling China’s capital flows.

Let us examine the basic problem. Global savings equal investment at a single world interest rate (absenting risk). Figure 1 draws the equilibrium for the two country world of China and the USA, given their savings and investment schedules. In a closed economy, US interest rates would clear the domestic market for saving above R* and output would be determined accordingly. But when we open up to capital flows at the world interest rate, R*, the US expands its investment demand relative to savings, running a deficit, and at those interest rates China generates a current account surplus. The surplus (deficit) in each year adds (reduces) to net foreign assets in each year in the creditor (debtor) country. 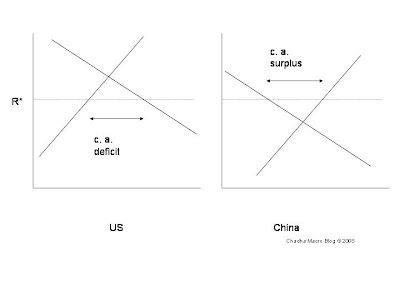 The counterpart of savings excess in China is excessive investment in the US - recall that this comprises both public and private investment. Is a small reduction in US demand (investment) the answer? Not necessarily. Even if demand falls sufficiently to eliminate the US current account deficit at stable world rates, R*, then China would still have excess savings. This excess would drive rates down from R* and lead to the re-mergence of a current account deficit, albeit with lower world rates and a lower level of global imbalances. Obviously with large enough falls in US demand you could get zero current account balances in both countries at very low R and low US demand. Perhaps this is the solution, as we stare at a global recession, that we are heading towards? 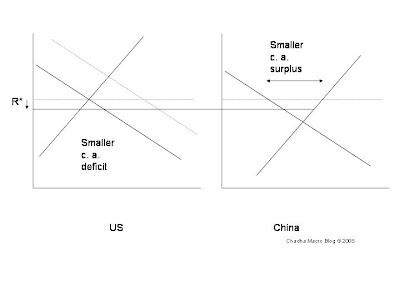 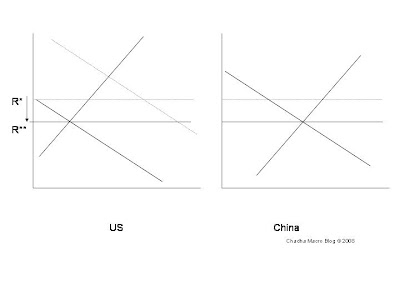 We can also consider a number of alternative solutions. For example, a shift up in Chinese demand to clear the surplus at R*, at the original equilibrium, will mean excess demand in the US continues and thus world rates R* will go higher and there will still be a Chinese surplus and a US deficit. Obviously again if Chinese demand shifts up even further we can have no capital flows but at significantly higher world interest rates and high world demand. This may not be the solution we are heading towards!

The problem with this diagram as far as I can see is that any R can lead to an initial equilibrium providing China is willing to lend (or borrow) and US is willing to borrow (or lend). And what we learn is that if we want to adjust to some different level or direction of capital flows is that if only one country adjusts the overall change in rates and output will be greater than if they both adjust somewhat.

So what is the constraint or target? It must be something to do with the equilibrium level of net foreign assets to GDP and flows from one country to another to meet that target. The US is a debtor nation, (at around 6-7% of global GDP) implying that its current demand will be met by saving from higher future income. In this scheme (and I do not know the actual numbers but according to the IMF’s WEO Emerging Asia is in credit by around 5% of global GDP) then China will be the creditor. But for the reasons given earlier China should probably be the net debtor and borrow from its higher future income. And so if we are to get to a situation when eventually China becomes a debtor so capital flows downhill (from rich to poor), this will imply the need for a surplus in the US and a deficit in China, which implies lower US demand, greater US savings, higher Chinese demand and lower Chinese savings. But we probably knew that!
Posted by Jagjit S. Chadha at Friday, October 31, 2008

This is an interesting post indeed. I found the way you interpret the imbalance scenario very appealing - very structured and in a clear manner. The imbalance and the way out imply a deep recession ahead. This is a convincing proposition to me. I also believe we cannot rely on shift-up in Chinese demand curve. Private consumption is not likely to boom as a result of smoothing, which is even more significant in China where complete social security system is still under construction. Government spending may moderate the level of shift-down of demand curve, but as far as I know government is very cautious in this direction simply because the sustainability of any costly fiscal plan.

Your model assumes a BOP balance in capital account and current account, but China faces double surplus lately, which is part of the imbalance story. One may believe a float RMB and open capital market are the solution to the problem. But the huge economy is unwilling to take the risk of changing quickly. To be honest, from what you wrote recently, I came to believe Chinese economy has huge impact on global economic and financial system but the policy makers in developed countries are just incapable to handle the changes. More on the imbalance problem, people in China including government think tank are believing the economic policy shall focused on adjusting the imbalance in the economy, for instance the low factor prices (land, fuel and resources etc), workers' benefits and so on. Without a fully market driven economy and financial market, the situation (increasing current account balance and low domestic consumption) will hold unchanged and we end up with the deadlock you describe. I believe Chinese government will carry on with its precautious reform (take the example of exchange rate) and the imbalance of US and China will take a long way to go.

To conclude, a recession of "L-shape" shall emerge from your analysis and we shall be prepared for a long winter.

The US runs an excess current account deficit which climbed to historically high levels between the years 2002 and 2006.

Basically, this excess deficit influenced the world economy in two direct ways. First, some countries which had chronic current account problems relieved from this trouble and IMF took some rest. Second, this deficit allowed some other countries to increase their account surpluses.

The analysis of IMF reports indicates that there were two regions in the world which could considerably increase their surpluses in this period: Asia-leading by China and OPEC-leading by oil exporters from the Arabian Peninsula. In 2005, these oil exporter`s surpluses outweighed China`s surplus as the oil prices rose further.

According to a report of the BEA, the total sum of US account deficit in this period is $3,126 billion. Surprisingly, the increase in the foreign official assets in the US perfectly corresponds with this number: $3,201 billion. Every dollar in the current account deficit turns to the US market as foreign investment.

If oil exporters from the Arabian Peninsula and China are the leading countries according to the classification of current account surpluses, we can assume that these countries were the main investors for the US assets.
Moreover, if oil exporters` surplus outweighs China`s surplus, we can further assume that the oil exporters` share in US assets was higher than the share of China.
It was an extraordinary expansion in the world under the extraordinary other circumstances. I think in the new equilibrium, there will be less US deficit and less surplus for other countries because the US has to supply money to the world, so it will continue to give current account deficit.